The River Bend Community Organic Garden exists to educate and encourage the community to improve its health and well-being by raising sustainable, organic food through best practice methods.

In December 2012, Town Council authorized the use of space on town land, and the vision of a River Bend Community Organic Garden became a reality. On Earth Day 2013 a group of twelve organic vegetable gardening enthusiasts broke ground and the vision took shape.

Over time the garden has evolved; it became both a demonstration space and an education center, utilizing best organic practices, experimenting with varieties of vegetables, and sharing the outcomes with the surrounding community through a variety of resources, including many free community workshops.

The garden is a space where community members work together, sharing their knowledge and enthusiasm to raise produce that is shared among gardeners, a designated charity, visitors and friends of the garden.

The Garden  donates a minimum of ten percent of the harvest each year to the under served and vulnerable client population of Interfaith Refugee Ministries. Town funding helped early development of the garden. In 2017-18 the garden will be fully self-supporting.

The garden is comprised of twenty-six raised beds. Four foot wide beds varying in length from twenty-two to forty-five feet long are separated by three foot wide wood chip covered paths. The beds are divided into four quadrants for purposes of operating a four section irrigation system. The entire space, 10,000 square feet, is surrounded by a seven foot tall net deer-fence and has been surprisingly successful in protecting he crops.

RBCOG operates year-round, producing more than thirty different vegetables, including potatoes, peanuts, garlic, onions, tomatoes, peppers, squash, beans, cantaloupe and watermelon.  A four-quadrant herb garden located in the center of the garden at the convergence of the main paths, contains culinary, medicinal and ornamental plants. Crops are rotated to maintain healthy soil. Compost, made onsite, and mulch are used.

Records are maintained to track every aspect of the garden experience: volunteer hours, plant varieties, crop rotation, harvest weight for every crop and herb, schematics of the garden for each planting season, number of monarchs released from the chrysalis nursery, irrigation and watering times, etc. A daily journal has been kept since Day One to document work dates, hours, weather, volunteers, and tasks.

Garden volunteers are the lifeblood of the garden – and its heartbeat. From expert to novice, all are welcome. There’s no residency requirement or fee to join. All one needs is an interest and some time. As gardeners work together, bonds form, friendships grow. They share garden experiences, recipes, and life stories. A garden family has been formed.  Our garden grows more than food.

The Garden donates a minimum of ten percent of the harvest each year to the underserved and vulnerable client population of Interfaith Refugee Ministries.

In keeping with the mission of educating the community, RBCOG has utilized many resources. During the years when the River Bender Newspaper was published, a monthly column offered timely information on gardening and growing. Free community workshops drew gardeners from the local area and distant towns. Topics ranged from starting a garden to preserving the produce. Over six years, twenty-eight workshops drew increasingly large audiences. Master Gardener education credits were granted. RBCOG became known for its educational offerings and the garden volunteers were recognized for the post-workshop delectable fare themed to the evening’s subject. The last workshop was the Sixth Annual Roundtable for Gardeners, conducted just before the world was shut down by the COVID pandemic. (Workshops can be viewed through links on the side of the webpage.)

From its inception, the garden has included a bird & butterfly area. Ellen Serra manages the annual and perennial flowers that are grown to draw butterflies and bees that will pollinate nearby vegetables. Each year the garden evolves. It provides seating that invites gardeners and visitors to stop, relax and enjoy the serenity of the surroundings. One section contains the Animal Garden. Designed for children each plant’s common name is that of an animal. There are elephant ears, lion’s mane, zebra plants and more. 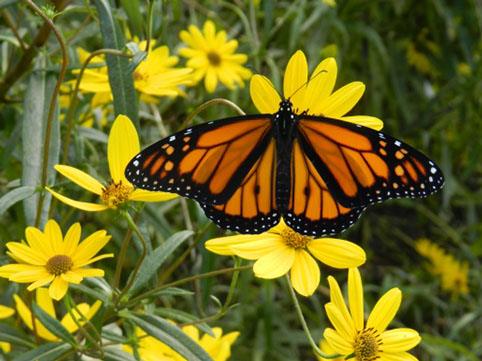 The Monarch Butterfly Garden was added in 2015. In January 2017, it received approval as a Certified Monarch Garden from the North American Butterfly Association (NABA).

Monarch butterflies have become an endangered species due to the decimation of their food sources. With the aid of a grant from the New Bern Garden Club and assistance from the New Bern High School Green Team, RBCOG coordinator Dee Smith designed a Monarch habitat. The Green Team’s success in growing the needed food source, asclepias (milkweed), led to the garden becoming part of the monarchs’ migration path from northern climates to Mexico.  In 2019 a habitat building was added where monarch chrysalides can safely evolve into the generation that will carry them on the final leg of their southern route and the first leg of the return northern migration. 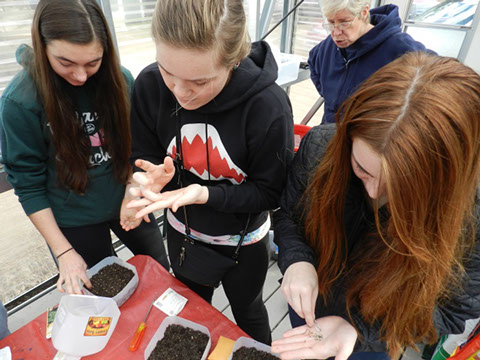 Our dedicated beekeeper, Dick Mazziotti, has devoted countless hours to building hives and keeping them populated. Dee, his resident assistant, has learned to check the hive and delivers sugar water as needed.

The Green Team, a group of students from New Bern High School concerned about environmental issues and food sustainability, made the garden one of their projects in 2013. They have remained with the garden every year since. They work in the garden bi-weekly, starting each session with a lesson about best organic growing practices and then performing tasks related to the lesson and other garden activities. In 2016 they helped expand the monarch butterfly garden into a habitat.

The garden is self-supporting through donations. It receives no funding. A Friends of the Garden group oversees a small account that covers some expenses. Some volunteers purchase items for the garden at their own expense. Community members donate garden items such as tools, wheelbarrows, bricks and rain barrels. The shed was purchased when a Friend of the Garden raised the money to purchase the lumber and a contractor volunteered his time construct the building and install shelves and skylights. Past donations included a riding mower, the greenhouse, a small metal shed and a chipper-shredder. A small income was derived from raffles that were offered at the workshops. The garden is grateful for any unsolicited financial contribution it receives. 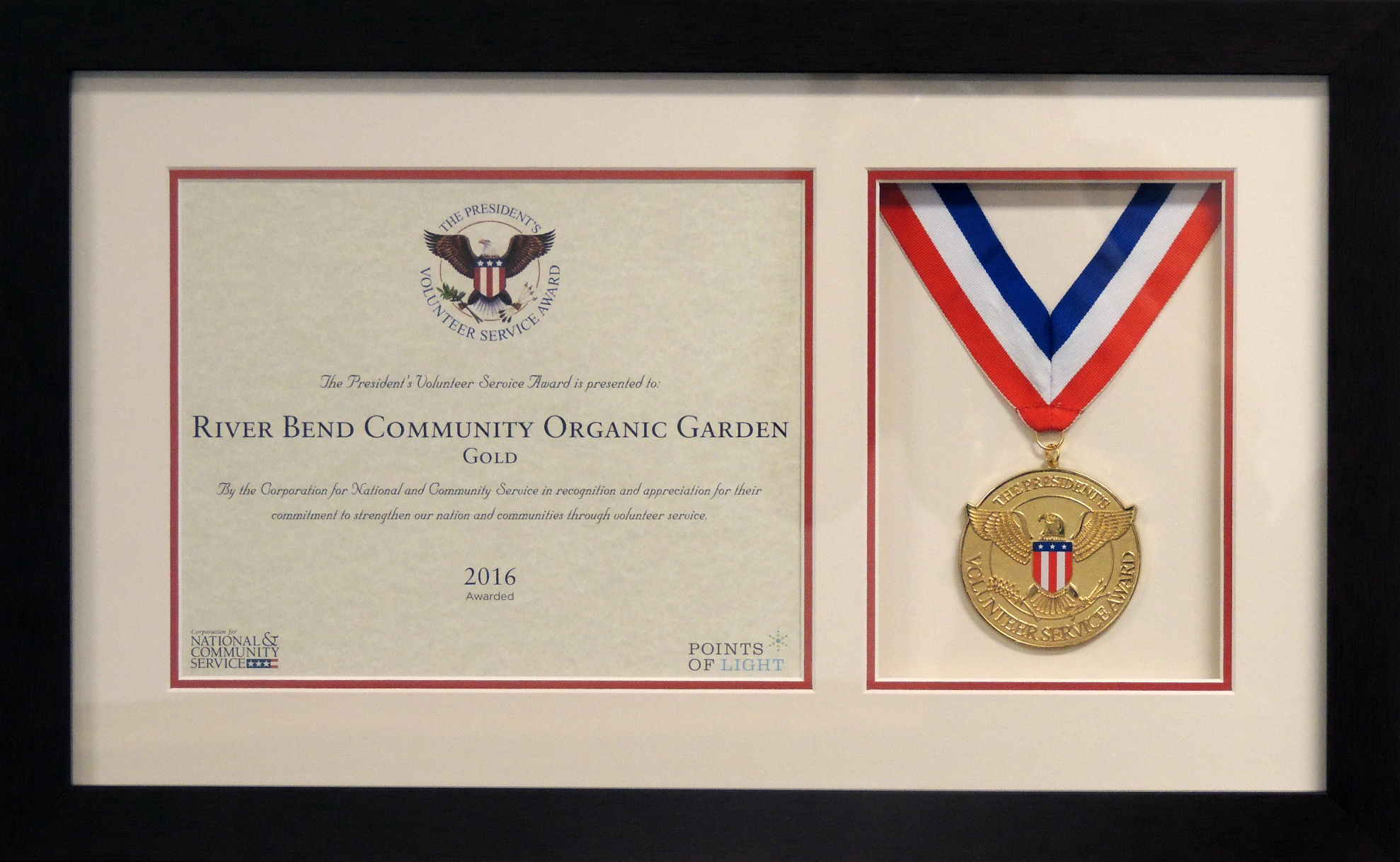 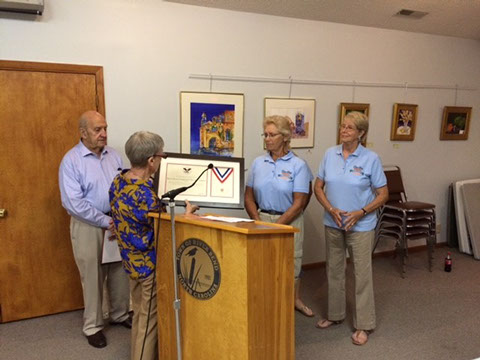 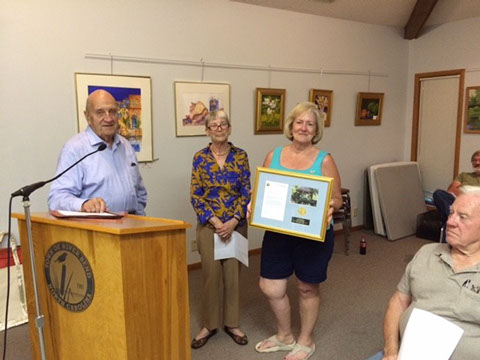 If you were unable to attend the workshops, you can view the videos below: